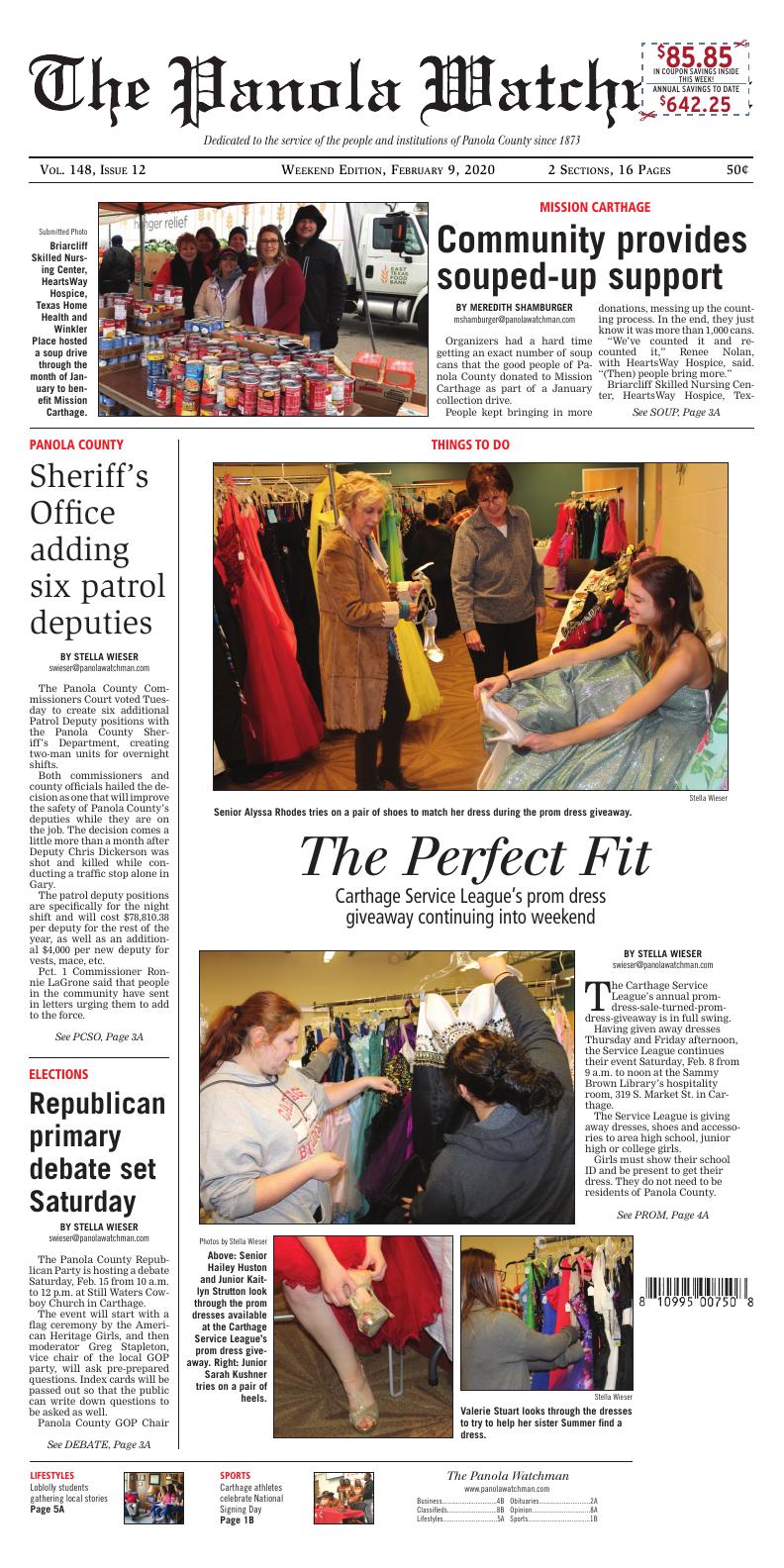 Senior Alyssa Rhodes tries on a pair of shoes to match her dress during the prom dress giveaway.

Senior Krislynn Joseph looks through the aisles of prom dresses.

Valerie Stuart looks through the dresses to try to help her sister Summer find a dress.

Summer Stuart shows off a dress to her older sister Valerie.

Junior Sarah Kushner tries on a pair of heels.

The Carthage Service League’s annual prom-dress-sale-turned-prom-dress-giveaway is in full swing.

Having given away dresses Thursday and Friday afternoon, the Service League continues their event Saturday, Feb. 8 from 9 a.m. to noon at the Sammy Brown Library’s hospitality room, 319 S. Market St. in Carthage.

The Service League is giving away dresses, shoes and accessories to area high school, junior high or college girls.

Girls must show their school ID and be present to get their dress. They do not need to be residents of Panola County. They are also encouraged to bring one item of nonperishable food to be donated to the Samaritan House.

Organizers Nancy Langford and Gayla LaGrone said they feel joy in helping the girls find a dress they like.

“It’s a wonderful time,” LaGrone said. “Like Nancy said, it’s a joy to be here and watch all these girls and watch them light up when they get the right dress, and I just feel like it’s Christmas over again every year we do it.”

“I’m happy to be giving back but also receiving,” she said. “I’m donating to the Samaritan House; I brought a bunch of canned foods, and then also getting my prom dress in return.”

Krislynn Joseph, a Tenaha senior, said she had no idea what kind of dress she was looking for.

“I’m just here to hopefully find something that fits that looks good that makes me feel pretty,” she said. “I didn’t go to my prom last year, so this year I hope I can actually go and enjoy myself.”

A number of girls came Thursday afternoon for the start of the prom dress giveaway, hosted by the Carthage Service League.

Cans of donated soup sit on a table at the Carthage Softball Complex as Mission Carthage volunteers prepare to sort and hand out groceries at their monthly produce drop on Wednesday.

Organizers had a hard time getting an exact number of soup cans that the good people of Panola County donated to Mission Carthage as part of a January collection drive.

People kept bringing in more donations, messing up the counting process. In the end, they just know it was more than 1,000 cans.

“We’ve counted it and recounted it,” Renee Nolan, with HeartsWay Hospice, said. “(Then) people bring more.”

Donations were given out during Mission Carthage’s produce drop at the Carthage Softball Complex last Wednesday, as temperatures dipped close to freezing.

“We’re so grateful and thankful for this group of ladies and gentlemen that put together this soup drive,” Mission Carthage’s Jennifer Randall said. “It’s freezing cold. We wish we had some way to make ‘em hot soup right now, but they’re wonderful servants of our community, and thee help us at Mission Carthage. We’re just so grateful for them, and I know that all the clients picking up today are going to be grateful for the soup as well.”

The businesses picked soup as their drive’s focus because January was National Soup Month. The group’s original goal was 600 cans.

“We did the heater drive, we did the fan drive,” Kim Henigan with HeartsWay Hospice said. “But I think this has been the most successful of all of them, and it didn’t dent anybody’s pocketbook.”

Panola County Sheriff Kevin Lake talks about the support the department has recieved from the community Wednesday, January 1, 2020, following the loss of Deputy Chris Dickerson who was shot and killed earlier in the week.

Both commissioners and county officials hailed the decision as one that will improve the safety of Panola County’s deputies while they are on the job. The decision comes a little more than a month after Deputy Chris Dickerson was shot and killed while conducting a traffic stop alone in Gary.

The patrol deputy positions are specifically for the night shift and will cost $78,810.38 per deputy for the rest of the year, as well as an additional $4,000 per new deputy for vests, mace, etc.

Pct. 1 Commissioner Ronnie LaGrone said that people in the community have sent in letters urging them to add to the force.

“I think the people have finally realized the danger we put these guys in every night,” LaGrone said. “It goes back many many many years when we’ve been lucky, so lucky this hasn’t happened before because from here today back to my time, I was the only one out there until daylight some mornings — wasn’t another deputy this whole county. It was a miracle we didn’t lose one back then. And as well equipped and trained as these are, you see what happened to this one, I think that it’s our duty to take care of their safety and look after the people in this county.”

“We have 12 patrol men, which is more than we’ve ever had, and have three on shift, and it’s because of the court that’s allowed us to have these additional officers over the past several years,” Lake said.

Lake said a rise in mental health-related issues that officers deal with means they’re taking people to the hospital sometimes once or twice a day when it used to be once or twice a quarter. That affects staffing, he said.

“As it is with single-man units, especially on the night — which is what we’re addressing here is the night shift — if I have deputies that are having to sit at the hospital with a mental health commitment, there are times that I am leaving one deputy by himself in the car in the county at night, and it just doesn’t cut it,” Lake said. “All of you know that; I’m preaching to the choir.”

The additional deputies will allow there to be three two-man units per night shift, Lake said.

“There’s going to be times that one of those guys is off and they got a single-man unit, so what our plan is, in the perfect world, is that that single-man unit will serve as a back-up unit only for that night,” Lake said. “He will respond at the office to take calls that come into the lobby, and he will serve as a back-up to the other two-man units responding to the call, or if one of them’s at hospital sitting with an inmate or with a mental health commitment or something like that, then our intention is for that single-man unit to still not be the primary unit making the traffic stops or responding to first man on the call. Doesn’t mean it’s not always goinging happen that way, but that’s the plan.”

State Rep. Chris Paddie, left, and Mark Williams are running for the District 9 seat in the Texas House of Representatives

The Panola County Republican Party is hosting a debate Saturday, Feb. 15 from 10 a.m. to 12 p.m. at Still Waters Cowboy Church in Carthage.

The event will start with a flag ceremony by the American Heritage Girls, and then moderator Greg Stapleton, vice chair of the local GOP party, will ask pre-prepared questions. Index cards will be passed out so that the public can write down questions to be asked as well.

Panola County GOP Chair Nicole Tarpley said they invited everyone running in the Republican primary from the president on down to the precinct chairs.

The people who have confirmed they are attending are U.S. Senate candidate Mark Yancey; Texas House District 9 Rep. Chris Paddie and opponent Mark Williams; and Nicole Tarpley and Linda Lawless, who are running for Panola County Republican Party Chair.

“Sometimes because the schedules are so tight before primaries, politicians do not respond and they just show up,” Tarpley said.

The debate at Still Waters is the exclusive debate between Paddie and Williams for House District 9. Tarpley emphasized its importance because the two will not be debating anywhere else.

Still Waters Cowboy Church is located at 1699 Texas 315 in Carthage. 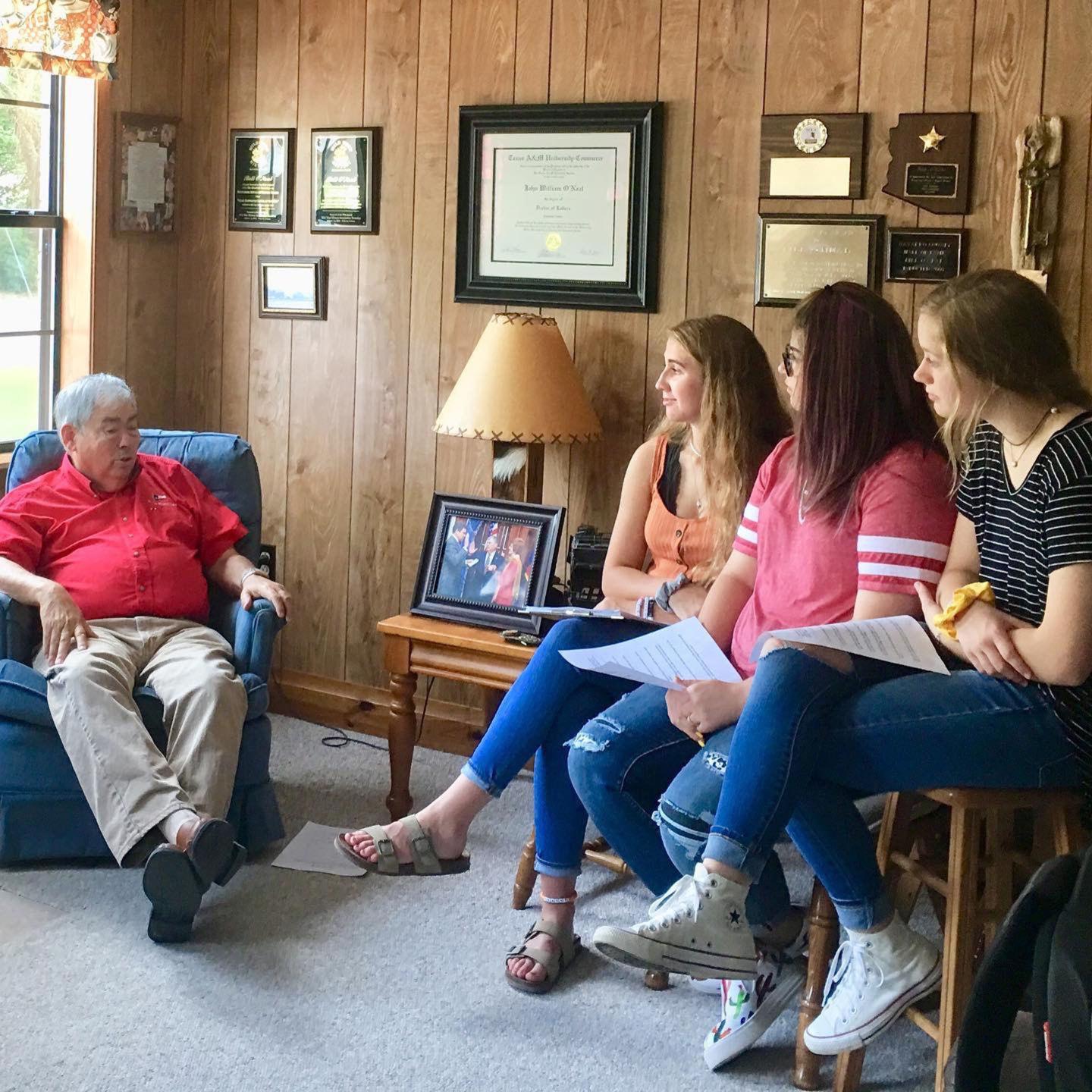 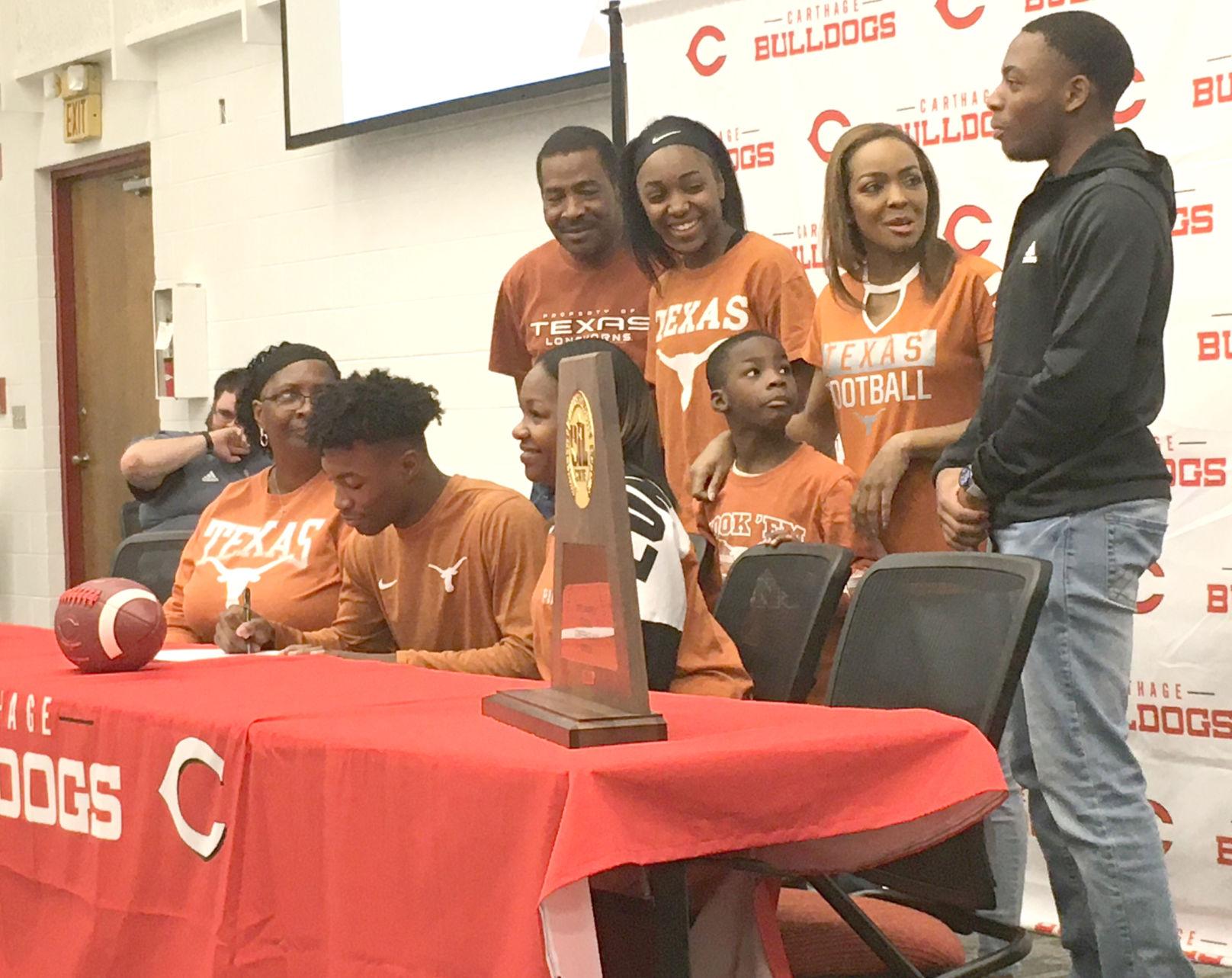 Kelvontay Dixon (center) signs his National Letter of Intent to play for the University of Texas while his family looks on Wednesday morning. 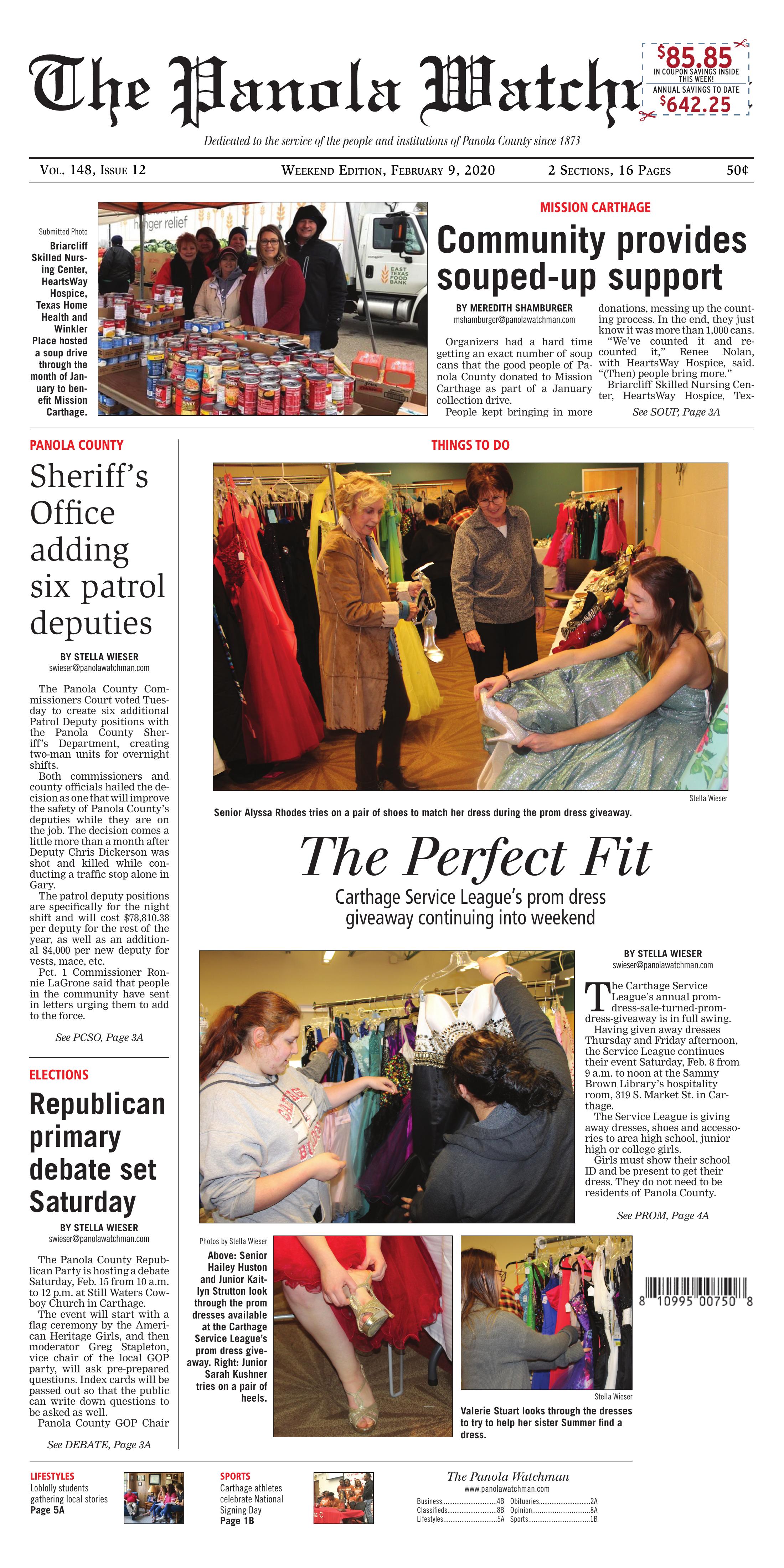